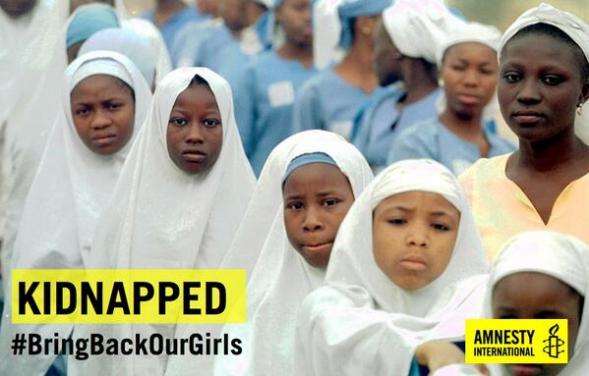 Over 200 Nigerian schoolgirls chose to defy the odds and get an education to better their lives, country, and the world. But educating a girl means granting them with limitless power, and for some, that’s a scary thing. In an effort to showcase their disapproval and put an end to such “defiance,” Islamist militant group, Boko Haram kidnapped (likely assaulted, abused, and sold) these same Nigerian schoolgirls. And how did the Nigerian government and major American news outlets respond? Well…they didn’t. You could say that between the missing Malaysian Airline and the South Korean ferry incident, there’s just not enough room. And what about Nigerian President, Goodluck Jonathon? Simply sending empty promises of comfort and peace with very little action. Therefore, millions of protesters took to social media sites in an effort to raise awareness of the issue by using the hashtag bring back our girls.

While this news story is gaining more and more attention, this tragedy, like many others, outrages me and causes me to ask why the lives of Black bodies are so devalued? Why is it that after thousands of years, Black bodies still don’t matter? Why is it that after thousands of years, Black bodies are still seen as property? Why is it that after thousands of years, Black bodies, particularly Black female bodies, are still disposable? If the kidnapped Nigerian girls were white, would they still be in chains, traversing through fields and plains? Would they be married off or sex slaves? Would they still be sold for just $12—the price of a Chipotle burrito meal? This is troubling. This is upsetting. And yet, this is reality. The Nigerian government and American media’s lack of immediate response to and advocacy for these girls…our sisters…our cousins…our daughters…our friends is very much in line with a long history of neglecting and trivializing Black lives. Where is the public outcry? Where is the action? Like Fannie Lou Hamer, I’m just tired of being sick and tired because, you know what, Black lives matter, too.

Trayvon Martin, Ramarley Graham, Sean Bell, Oscar Grant, Marissa Alexander, Stop and Frisk, Sarah Baartman, the Tuskegee trials, Henrietta Lacks, Dr. J Marion Sims experiments, 4. Little. Girls. You may not recognize all of these names, but they are victims of a system that never cared about them because of the color of their skin. Our aesthetic differences do not make us inferior. Our differences do not make us savages or animals. Our differences do not make us less deserving of basic human rights. For centuries, Black bodies, particularly female bodies, have been both fascinating and frightening—complex emotions, right? But these tired and overused sentiments of Black identity [and the identities of anyone who deviates from societal norms] are just that, tired and overused. They’re stale and antiquated. We are worth more than a mediocre search for the “bad guy.” We are worth more than Jim Crow Laws that seem to have made their way to the other side of the Mason-Dixon line. We are worth more than a courtroom filled with 12 Angry Men. We are worth more than Bravo and VH1’s poor attempts to reflect our community because Love and Hip Hop just won’t do. We sit and wait for a Martin, a Malcolm, a Medgar, and even a Marcus to save us, but for the sake of our people, our country, and this world, we must be our own Mandelas!

From gun violence and health care to sex trafficking and inadequate education, we should be more outraged and more vocal about doing something to help not only the over 200 kidnapped Nigerian girls, but the many children all over the world who dare to dream, who dare to be different, who dare to learn, who dare to fly, but just don’t have the opportunity to do so. Maybe it’s their government or culture. Maybe it’s their gender or orientation. Maybe it’s their socioeconomic religious background. Whatever the factor(s), more has to be done. James Baldwin once said, “to be Black and conscious in America is to be in a constant state of rage.” In 2014, most folks of any background are sleepwalking or just plain sleeping.

Now back to your regularly scheduled programming…

One thought on “Kermit Says: Be OUTRAGED”

Hi, and welcome to Kermit Says... It’s great to meet you! I’m Kirstin (Kermit's my nickname), the twenty-something writer, editor, and visionary of Kermit Says... Born and raised on Chicago’s south side, I am what happens when you choose to live life colorfully, boldly, and radiantly, and this website will give you the tools and motivation to dare to be different! As a certified Youth, Parent, and Family Life Coach, English educator, daughter, sister, and friend, my goal is to enrich, enliven, encourage, and empower everyone I meet, and I hope these weekly posts will leave you with rays of sunshine to do just that! Let’s get started…

It’s been one heck of a week, friends, and it’s okay if all you did was breathe. Click the link in the bio for how breathing can help get us through our most overwhelming and distressing moments. #kermitsays #motivationalmonday #motivation #inspiration #conversation #selfcare #mentalhealth #deepbreathing #teenadvice

Looking for something? Don’t fear! This search bar is here!